When non-binary business owner Quinn Daley (they/them) ran in a general election in the UK last year, they were repeatedly misgendered during debates--with the exception of one opponent: the super conservative Tory.

“The one rival candidate who asked me what my pronouns were, and got it right for the first time, was the TORY CANDIDATE!” Quinn said with the energy that comes with a lasting memory. “That’s actually problematic in a lot of ways.”

Quinn is the founder of full stack consultancy Fish Percolator, and has since decided to use their tech skills to create Name.pn. They hope it will make life just a little bit easier for their fellow non-binary/queer/trans peers--as well as the cis people around them.

“There’s the trans-accepting group and the transphobic group, but the reality is the vast majority of people live somewhere in between--the ones who don’t put any effort into NOT being transphobic,” Quinn says.

This grey area of thinking can be more marginalizing to the non-binary experience than some might think, and pronouns are a great place to start. That’s why we sat down with Quinn to hear what their experience has been, how they handle the common pronoun fumble, and why it’s so important for everyone to make the connection between language and intention.

“Isn’t gender just a made-up concept anyway? You might hear people say ‘gender is a social construct.’ This is true, but that definition also includes social constructs like money, government and nationality. That doesn’t make them any less real.” --Quinn Daley, On Being a Trans Business Owner (Medium)

What’s the idea behind Name.pn?

There are a lot of people who get misgendered in public places. [People] look at your face, listen to your voice, look at your clothes, and they guess which pronouns to use when talking about you, because really they’re just guessing your gender.

I’d love to live in a world where people don’t guess your gender based on how you look. A world where everyone states their pronouns when they introduce themselves, not just the trans people. Right now, cis people tend to be really uncomfortable with the idea, but to be a real ally you have to be prepared to accept some discomfort in order to sympathize with the discomfort others in the room feel all the time.

I created Name.pn (“pn” for pronouns and pronunciation) because I wanted to be a bit more insidious about getting the act of declaring pronouns into people’s lives. I thought, “What if I can make it appeal to everyone, not just trans people? Everyone has a story about people mispronouncing their names, or with nicknames they don’t want to be called. Everyone has their own name gripe--this is not a problem that’s unique to trans people.

Name.pn allows people to have a single page showing how they want their name to be used (when speaking with English speakers, for now).

How would you like people to address you in different contexts? Instead of asking people for “title,” “first name,” “last name,” etc., it asks people what they would like to be called in a formal setting, for example. Turns out almost everyone puts their first name. You wouldn’t know that everyone prefers to be addressed that way unless you asked the question the right way.

Eventually the goal is to get to a place where people can link to all the ways they want their name and pronouns to be used, how to pronounce their name, their nicknames, etc. (like, “My name is David, never call me Dave”). People could simply look up how others like to be addressed instead of guessing. Maybe even an API so that other software could look up the right way to use your name in every context. That’s the long-term goal.

You are an advocate for correct pronoun usage. In your experience, what are the main reasons for misgendering--laziness, confusion, resistance?

It’s all of those things, and some other factors.

Right now in the UK, there’s a coordinated attack in the media (coming from both sides, politically), against trans people. Trans people are stuck in the middle of what the news is calling “a culture war.” The [leading newspapers] rarely let transgender people speak for ourselves in the media.

In the business world, I’ve found that the people who say they’re fine with my pronouns are the ones who most often get my pronouns wrong. To them, [pronouns] are not a big deal. But it IS a big deal to me and I want them to consider it a big deal. That's why they aren’t getting it right—that's actually the most common cause. They see me as the gender I was assigned at birth, so they can’t get those pronouns out of their head. My pronouns are “they” and “them” and it hurts when people use “he” and “him” because they remind me of the 35 years I felt forced into a box that didn’t fit. (It’s only those pronouns that hurt; calling me “she” and “her” is wrong, but it doesn’t hurt me in the same way.)

"In the business world, I’ve found that the people who say they’re fine with my pronouns are the ones who most often get my pronouns wrong."

Sometimes people think singular “they” is grammatically incorrect, but its usage is at least as old as singular “you” (how often do you say “thou” in everyday speech today?). People only started railing against its grammar in the 19th century.

But whether or not “they/them” has a history in English is kind of a red herring. Even if people use completely new pronouns (I have friends who use “ze/hir” and “a/aer”), all we’re asking for is that you respect that these are the correct pronouns to use for us if you want to avoid hurting us.

[Compared to other languages], English is broken in the sense that we dropped grammatical gender for all purposes except talking about a person. We only use gendered pronouns when talking about people, and as a result English-speakers tend to conflate grammatical gender with a person’s gender. In languages where grammatical gender applies to everything, like French, people don’t think “This table is a man.” I speak a little Italian and as I understand it, non-binary people in Italy do use gender-neutral pronouns, but it’s maybe less of a big deal if people get it wrong, because of this.

What is it like when people use incorrect pronouns for you, and what is their reaction to being corrected?

In a business context, I do try to correct people the first three or four times. After that I haven’t found anything to be effective. I just quietly get upset.

It's not just the business context, it's my family of origin too. They might say that they accept that I'm trans in the most superficial way (they have accepted that I have changed my name) but they don't want to do any work around using the right language or conceptualizing me in their head as a person who is other than the gender I was assigned at birth.

It’s a lot of work when I have to correct people all the time myself. It is nice when someone else [corrects others] and stands up for me.

I was at a conference--not work-related--and I was at a table with a bunch of people, and there was a woman there who said to the table, “I’m the only person at this table who isn’t a man!” I wanted to say, how do you know that? I didn’t want to speak up because I feared that maybe it wasn’t just an assumption--maybe she subscribes to transphobic views and I certainly didn’t want an argument. If I don’t feel like I’m the one in charge in a situation, I probably won’t correct people at all. I want to get better at this, though.

Online I will correct people, like if someone sends me an email with the wrong pronouns. But you know those studies on how women in business use language that tries to keep men’s feelings from being hurt? I end up doing that as well when I correct people--trying to stop cis people from getting their feelings hurt. But in doing that I feel that it doesn’t have the same impact because they can’t see they’ve hurt my feelings. Yes, maybe 100 people hurt me in this way every day, but that doesn’t mean it stops hurting.

Perhaps for people who knew me before I came out, in their minds, I spent 35 years pretending to be a man, so why can’t I pretend to be a man a little bit longer? Well, because I don’t want to. I’ve discovered who I am now and I’ve discovered what life feels like without that little pain I was feeling all the time before.

Final pronouns question: when trans people make a shift from “he” to “she,” or “she” to “he,” that seems a little easier for others to grasp than “they.” Would you say it’s more challenging for trans and non-binary people who subscribe to neither pronoun?

If people adopt an external presentation of themselves that matches the “he” or “she,” maybe it’s easier for cis people to get that. But I think trans people want to have the same freedom to dress how they like as cis people do. I know trans men who wear makeup and sometimes skirts, for example. That’s harder for cis people to deal with, so I don’t think that binary trans people really have it any easier than non-binary people do-- it just manifests in a different way. They might feel pressure to conform to a gender stereotype in order to “pass” as their gender--but “passing” is really a goal that exists only to appease cis people’s prejudices.

Trans women also have to face the misogyny that all women experience, and a special unique kind of prejudice called “transmisogyny” on top of that. So (whether or not people get their pronouns right) they have a lot more to deal with on a day-to-day basis than I do.

I think what’s unique for non-binary people is that the cis public at large don’t know we exist at all. I am trans, but I don’t want you to think of me as a woman, I just want you to stop thinking of me as a man.

We have this flawed Gender Recognition Act in the UK that only applies to binary trans people so long as they go through a medical transition. (By medical I mean they have to have talked to a panel of doctors and psychiatrists, who then get to decide if the person is trans or not.)

Even [Conservative] Theresa May wanted to fix this, that’s how humiliating and degrading it is. She’s hardly a big human rights person and this was even bad enough for her! (Current Prime Minister Boris Johnson has apparently canned all of the progress on fixing this.) And as well as the archaic process, right now the law still only recognizes two genders here. Personally, all my documents have either “M”or “F” on them--I alternate to mix it up until I can actually list my real gender.

Quinn Daley is founder and managing director of Fish Percolator, which develops collaborative software. They are based in Leeds, England. Follow them on Twitter and LinkedIn.

Lesson learned from women who defied the odds in small business. 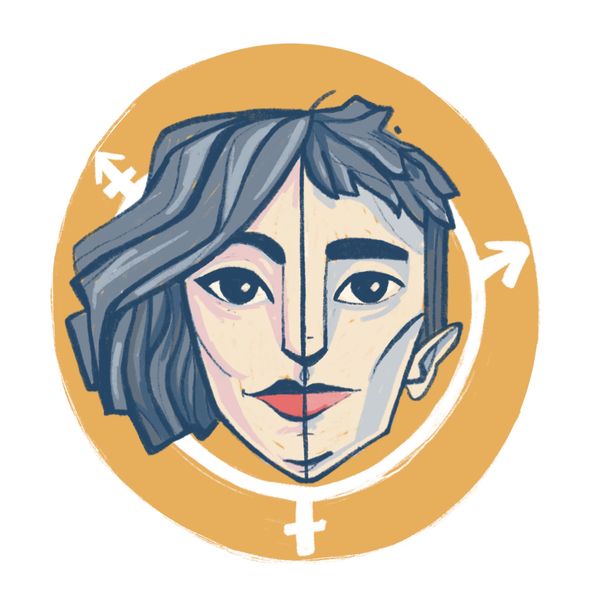 European entrepreneur Juliane Röll started a successful consulting business, then came out as transgender to co-workers and clients. Here's what happened.